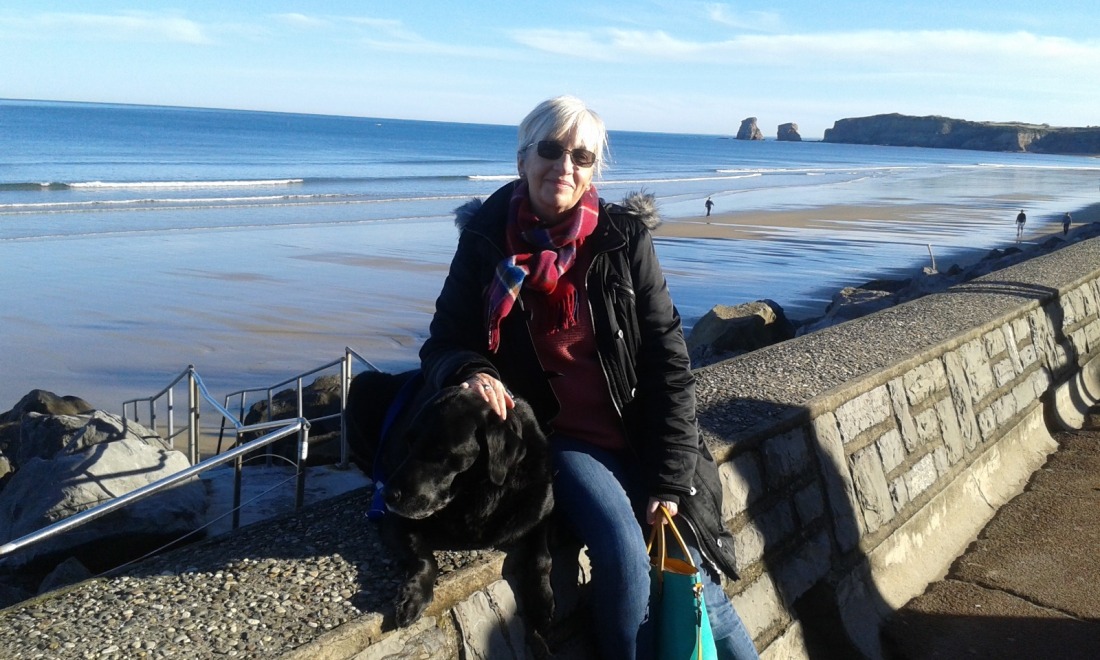 Not  a very catchy title I’ll admit, if you can think of a better one please suggest it to me!

However, it was 37 years later that I arrived in the French seaside town of Hendaye with Walt and Benny.  In June 1980 I camped in this beautiful little town with friends from college and student life in Glasgow.  I was a fully qualified English teacher with no job due to government cut backs and so I thought I’d give maize picking in the South West corner of France a go…… it didn’t quite work out and I came home with my first ever, but sadly not last, over draft!  Luckily I had my parents’ family business to go home to and a few months of doing VAT before a teaching job opened up.  However I remembered this little town fondly, it is very pretty with a beautiful Victorian sea front.   It gained some infamy in 1940 when Hitler met Franco there to discuss a Nazi/Falange pact but don’t let that put you off!

Walt retired from forty four years of engineering in January 2017 and we decided that he would move out to Spain as soon as possible with our black lab Ben.  That meant a road trip to Portsmouth and ferry to France as we could not get a berth on the Bilboa or Santander crossings.  We set of in the February break ( half term).  Walt had said goodbye to his workmates in the traditional fashion a few weeks earlier.. a few drinks in the pub!  He loaded our old car with his clothes and bike stuff,  not much else, he really isn’t a possessions sort of guy unless you count his motor bike.

I had always had romantic notions of driving through France on quiet, poplar lined roads and stopping here and there for good coffee and baguettes.  It was almost that wonderful.  For the first section of the journey, we did avoid motorways and drove on the tree lined roads of my dreams.  We stopped for coffee and baguettes, problem for Walt as is a tea only man but I didn’t let that spoil the atmosphere.  Eventually we had to take some motorways or we would not have reached Hendaye for days.  France is a deceptively big country.   As darkness fell, the cold, dry winter day gave way to a down pour.   We were using our mobiles as sat navs and just as we approached our destination, they both died.   At this point we were on a cliff top road in total darkness, and it was shear luck that took us in to the town below still clueless as to the where abouts of our hotel.  We are a good travelling team, and managed not to lose the head but being thrown out of the car in the pouring rain to get directions because ‘ you speak French’ did not endear me to my darling husband .   I did and the check out lady at a supermarket was very helpful.  We found our hotel, had a lovely dinner and woke up to sunshine.

After a walk along the beach and photos of the ‘twins’ ,  we drove home to Murcia in one long haul.   It had been a pleasure seeing Hendaye again after so many years.  It hadn’t changed too much,  I will be back!

I flew home to Scotland at the end of that week, leaving my man and my dug…  it was strange feeling but an adventure for both of us.  The next few months I would spend working and meeting friends to say good bye…lots of lovely lunches and much wine.  Walt would walk Benny, improve his Spanish at classes on the coast and paint… the house, he had not been inspired by the journey to become a Picasso. We also had to decide what to do with our Scottish home, sell or let?  On the advice of our estate agent, we decided to sell.  This was it… total immersion in a new country and no bolt hole to fall back on.  Scary and exciting at the same time.

The solo living experiment was interesting – something I had never done in all my 59 years!  I come from a large noisy family, left home at 18 to live in halls of residence and student flats , went home again for a year , got married the first time at 23 and had four children.  Walt has more experience , a seven year ‘cottage ‘ gap between marriage number one and me …besides which he had Ben! Our flat was so tidy and I enjoyed sleeping diagonally in our king sized bed but I missed my boys.  Four weeks in ,  I flew to Malaga as there were no Alicante flights that would tie in with leaving school on Friday and getting back for Monday morning. It was March and perfect sunny spring weather.  Walt rode down on the motorbike , picked me up at the airport and took me to our hotel in Torremolinos.  AKA the ‘Youth Club’.   Two months later Torremolinos would be full of heavy drinking, sunburned Brits but in March it was senior Spaniards, a few mature French folk and us.  These guys loved to party and dance and boy could they dance .  They were an inspiration – having fun and still wearing 4” heels!  The Costas get the reputation for being over commercialised and not ‘real Spain’ but the long walks along an immaculate sea front with not an English breakfast in sight , being the youngsters in our hotel and blue skies and sunshine made my Monday morning alarm much easier to cope with! ‘ y viva España ‘!

Life has been so busy since then, we have just come back from another epic road trip to celebrate the marriage of my daughter Hannah in Italy.  For the first time in over eighteen months, I have a quiet month ahead in which to contemplate what we have done and look back on the ups and downs of our retirement and move.   I exaggerate slightly here because we did have a very quiet May, despite plans to take the motor bike to Morocco.  It was the enforced quiet of that month that lead me to start writing and to think seriously about the choices we baby boomers have been given.   That is a story for another day and a whole set of questions for the wise old owls out there.

I began writing on my lap top  about our journey back in May of this year after a rather scary accident. More of that later.  To begin with it was more of a reflection on getting older, retiring abroad and the nagging question in my brain ( I gave every one a huge fright and spent 5 days in hospital) –  what should a grandmother really be doing in her 60s?  There are many words stored on my documents and I will plunder them occasionally.  I am sure I am not alone in feeling a little strange at the end of an era, turning 60 and retiring. I am delighted but it does take adjusting to. More recently I have been recalling the  actual journey from work and home in Scotland to retirement here in Spain .

I have taken the advice of younger friends and jumped in to this Word Press world.   It is good fun.  I have an overwhelming fear of appearing to be ego driven.  In fact this fear is in itself ego driven ,  remember Dickens’ very humble character? Turns out he was the worst type of villain!   However Word Press feels safe as I can enjoy writing, popping things out there and if people have time to read and comment then great.   My chapters/ posts therefore will hover between the story of our adventures so far and thoughts on what we have learned and are still learning and how it feels to live abroad, the order may be a little chaotic but that reflects the way my head and heart tend to work.

I am not alone, some of us retire happily with out a back word glance.  Others struggle with what to do with our  days.  For those with a spouse or partner, being with each other all day and entry day can be a challenge . Some fill those days with so much that they are almost as exhausted as when working but it does keep thoughts at bay.  Some travel the world , some become full time child minders or still have even more elderly parents to look after.   It is a rich and exciting tapestry and I am just beginning to realise that like our younger lives, there is no one right way to be ‘ an oldie’ , senior citizen ( aargh), aging baby boomer or simply a daft old bat – me?